Windows 10 Forced Updates - Yet another reason to dislike Windows 10

There are as many reasons to dislike windows 10 as there are grains of sand on the beach. Here is one that I just experienced.

Last night, I closed the lid on the laptop and heard it beep to indicate that it was sleeping.

Today, when I picked up the laptop, it was hot. This indicates that the CPU was running, probably all night. There is an older CPU in the machine and it gets fairly hot when called on to do a lot of calculating. I have, in the past, seen Windows go into a CPU loop after a patch is installed and prior to the mandated reboot. Had the machine not been in a well ventilated position, this could have caused a fire.

But, it is restarting, rather than resuming. Work in flight is lost (hibernation is disabled).

More than restarting, it is installing bug fixes as part of the boot process. WTF?

The Windows Update history shows that it installed an update, KB4023057, yesterday. When yesterday? None of my business. King Microsoft only deems us peasants worthy of the date, the time of day is reserved for the Royals.

The fix is dated January 25, 2018. Those deferrals for feature and quality updates appear to be a scam. 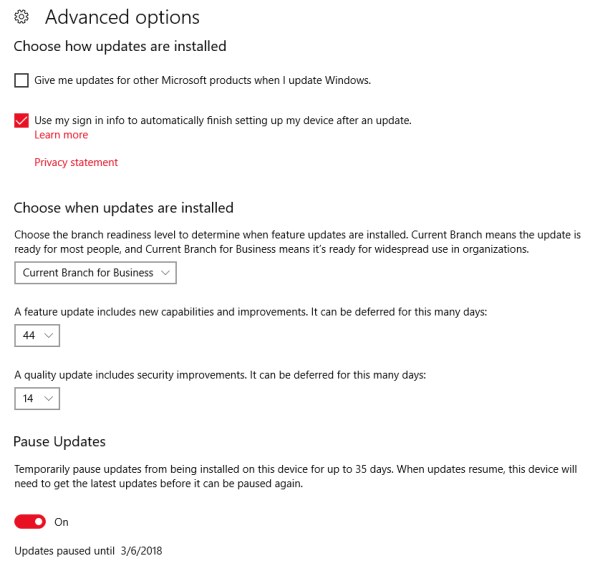 I am increasing the number of delay days (above) and just now turned on the option to pause updates until March 6, 2018. Who knows if that option is also a scam.

Forcing a reboot of my computer while both it and I are sleeping is a sin that can NEVER be forgiven. So too, is not following your own rules for installing bug fixes. Clearly, Microsoft thinks that it is their software rather than ours. Legally, this may be true, but dealing with their victims (a.k.a. customers) like this, just drives them away.